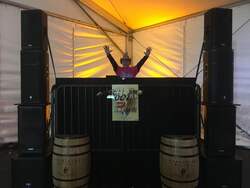 Patrick began his DJ career in New York City, working in major nightclubs such as The Palladium, The Underground, and Visage.  He moved to L.A. in 1985 and he worked in Nightclubs and continued to DJ/MC for Weddings and Private Events.   Patrick was personally selected to DJ for Rob Lowe's 25th Birthday Party, Suzanne Somers Birthday Party, and for Susan Rattan's Wedding.

After moving to Las Vegas in 1991, Patrick worked at The Metz Nightclub on the Las Vegas Strip as resident DJ for 5 years while continuing to DJ for Private Events and Weddings. Patrick was the DJ for the television program "The Wedding Story" TV show (Vivek and Charleen Ramen) in 2003. He was also DJ for Celine Dion's 100th sold out performance party as well as Steve Wynn's daughter, Kevyn's,  Engagement Party.  He also played for a Soprano's party with Steven Shirippa as host.

Patrick mainly DJ's for Weddings and Corporate Events and collects all types of music. He currently carries over 100,000 titles to every event on two laptops with Serato and Virtual DJ. His equipment is all top of the line including: Mackie, QSC, and JBL speakers, Shure Wireless Microphones, Rane Mixer, and Denon & Pioneer mp3 controllers. He works full time in the music industry, and when he's not at an event, he is mixing music in his studio for aerobic instructors. He helped in the music production for Kathy Smith's and Heather Locklear's exercise video's, and worked with Kimiko Tanaka mixing music for the L.A. Raiders Cheerleaders.

With over two decades of experience, Patrick's specialty is customizing each event!
At Weddings, Patrick will visit each table to take requests from your guests, which will enable him to keep the dancefloor active for the evening, and only if agreed upon by the Bride and Groom.
Sometimes the Bride and Groom would rather pick all the music for the Evening.